Do you know you don’t have to show children how to misbehave or be selfish? It’s embedded in their thinking as soon as they’re born. Yes, really!

I certainly was no exception, just ask my Mama. She’ll tell you! I was horribly difficult and hard. Full of sass and of myself, just ask her. If she tells you differently, she’s just trying to be nice and she’s not telling the truth.

I mean any child who would hold their breath until they pass out has issues and I certainly had my share and in truth, I still do.

Anyway, I vividly remember going to the drug store in downtown Brevard one afternoon. I cannot remember why we went, I just remember the magazine rack was calling me the minute I walked in. I was a huge fan of Sesame Street and there it was staring me right in the face. A Sesame Street magazine. Full of entertaining articles and games. It beckoned me. I took it off the shelf and decided that I needed to take it home with me. Sadly, Mom didn’t agree and told me to put it back. It wasn’t that easy. In my mind, it was already going home with me and so I clung to it for dear life as Meanwhile, Mom kept telling me to put it back. 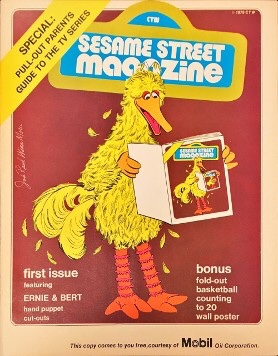 Then I did the unthinkable, she turned her back and I slid the magazine under my shirt. Oh, I knew what I was doing was wrong but I was going to have that magazine one way or the other. If she wouldn’t buy it, I would take it. Besides, they had several and wouldn’t miss just one.

Surprisingly, I made it all the way home with the magazine. I carefully placed it on the floorboard. After we got home, I ventured back out to the car to retrieve my magazine. Apparently, Mom thought I was acting slightly sneaky or sly and so she came out the door just in time to see me with my stolen magazine. She was mortified, to put it mildly.

“Kelly Annette, is that the magazine from the Drug Store?” (You always know when the full name comes out it’s never going to end well)

“I didn’t buy it for you which means you stole it. You took something that didn’t belong to you. I am so disappointed in you.”

She fumed a bit more and then finally said, “You and I are going right back to the Drug Store and you are going to take the magazine back and apologize for taking it.”

I think I have purposefully forgotten the ride back to the Drug Store, probably a good thing.

Mom was so embarrassed by my behavior but she marched me right back into the store and then she made me stand there and notify the sales clerk of my wrongdoing. Now, I was the one who felt embarrassed. I knew I had done wrong when I did it but now I had to come face to face with my crime and it didn’t feel good.

Needless to say, I learned my lesson about shoplifting.

When I think back on that day, I am reminded of a few things.

First, I wanted something so badly I took matters into my own hands and I did something wrong to get something I wanted. I justified my actions by reasoning that one wouldn’t be missed. And it makes me wonder, how many times since then I’ve tried to justify my actions or behavior.

Third, I learned a valuable lesson in doing the right thing even when it hurts. Initially, I didn’t feel remorse for taking the magazine. In fact, my apology and admission of a crime, at the time, was very forced and not heartfelt. However, over time, I did feel sorry for taking the magazine. I began to realize the predicament I had caused Mom and myself. It took a long time for her to trust me in a store again and I don’t know if she ever took me back to the Drug Store again.

In truth, if Mom had not made me do the right thing, I don’t know if I would strive to do the right thing today. Parents, teach your children. Train them to take responsibility for their actions. Teach them hard lessons but love them through it.