This was originally posted on April 5, 2019, but stories like these are meant to be told and retold. For me, it’s such a great reminder of how lucky I have been to have such a great story to share.

I’ve been avoiding this post like the plague. A few weeks ago when God began churning my heart, I told Him, “Not now”. Yes, like I’ve said before delayed obedience is disobedience and I disobeyed.

I think as I write you will see why I avoided writing. However, the urge is so great within me, I can no longer resist.

As you know my biological father died when I was 7. He died from Melanoma and you can read some of his stories in my blog post, My sweetest sorrow.

Now, we are at another crossroads with cancer. My stepfather, Ned. He was diagnosed 18 months ago with Stage 4 Atypical Non-small cell adenocarcinoma lung cancer. It sucks. I’m just not going to sugarcoat anything about it.

A few months back, well technically a few years ago God began to stir this thought and idea about these two men I have had to privilege of calling Dad.

Mack, my dad, had a strong enduring faith in God. He hoped beyond all hope that one day a cure for Melanoma would be discovered. Knowing full well it would not be in his lifetime, he allowed the doctors at Baptist Hospital (Wake Forest) to try new treatments on him. He was their guinea pig. His philosophy and mindset were to aid in the research and help others in the future.

Another thing to understand about my dad is that he never shied away from sharing his faith. He firmly grasped and held tight to his belief in Jesus. He had strong convictions about sharing his faith and the above picture is a treasure straight out of his Bible. He desired to see that no one would perish without knowing Jesus. His chief goal in life.

I believe that through his death his chief goal was reached and realized. When Jesus tells us in John 15:13 “Greater love hath no man than this, that a man lay down his life for his friends.”

Bear with me while I explain.

When Mom and Ned began dating Ned wasn’t living out a full life with Christ at the center. He had made a profession of faith but wasn’t living a life reflective of Christ.

As their relationship began to grow so did his love for Jesus. Eventually leading up to his rededication. In perfect Ned style, it was not a haphazard decision, it was done with intent and passion. A decision he will tell you was the best choice he ever made aside from marrying my Mom.

The reality here is that without my dad having died, Ned may have never been able to experience the blessed life that only Jesus can give. If you ask Mack if it was worth dying for he would say, “I wouldn’t have it any other way.”

When I wrote these words, Ned was still with us and it would only be another six weeks until God would call him Home. Today marks 43 years since my Daddy has been in Heaven. In the past, this particular day has been such a painful hard day, but not today. What’s different?

My attitude. What I’ve realized with both Daddy and Ned was they were willing to embrace the process, to endure the pain to receive the victory. They both knew the earth was their temporary dwelling and they both knew where they were going. Isn’t that exactly what Jesus did for us on the cross?

His soul agonized over having to endure the cross. He begged God for another way. When He knew there was no other way, He simply said, ”Not my will but yours” At this point, He embraced the process. He endured the cross. And when he spoke, ”It is finished” is His declaration of victory.

You will never get to the victory of the cross without enduring the pain and you’ll never be able to endure the pain without embracing the process.

I found this devotion in my Dad’s Bible. I wonder if it was something he had before his diagnosis or if he found it later. I don’t know the answer but what I know is that He bravely witnessed for the Lord and many lives were changed…….mine included.

What do these three words mean to you, “It is finished”? Before you answer let me put it to you like this. Your answer will determine your future. Yes, really. This is the climax of why Jesus came. It is the very reason He was born. It was His purpose. Think about that for just a moment: Jesus was born to die.

Let’s observe for just a minute all that was taking place on Good Friday. It looks and feels like anything but good. Jesus has been sentenced to death because of His claim to be the Messiah. They put a crown of thorns on his head. They beat him. They spit on him. They slapped him. They mocked Him. They even cast lots for His clothes.

Jesus knew both the horror and joy this day would bring. This is why he begged, “Father, if you are willing, take this cup from me; yet not my will, but yours be done.”Luke 22:42. He knew what He would endure. He knew he would be beaten, mocked, shamed, and nailed to the cross. But that’s not the part that ripped his heart out. He knew that He would have to endure separation from God. He had never been separated from His Father. But He also knew it was the only way and so He willingly obeyed. Did he have to? No, He didn’t. He could’ve made excuses. He could’ve told God that it would be way too hard and to find another way. Yet, He willingly submitted to God’s authority because He knew that God’s plan was best.

After making their way to Golgotha, He was nailed to the cross. There he hung on the cross between two thieves. And here’s where the rubber meets the road for these two men. Here’s where the heart of the matter is. One asks Jesus to remember Him and one doesn’t. They both are faced with the same choice. So, what makes the difference? The difference resides in their hearts. One sees himself as a sinner in need of a Savior. The other doesn’t see his need at all. In essence, it’s the same choice we are faced with. Will we acknowledge Jesus for who He is and admit that we are sinners in need of Savior. After all, we are told that “All have sinned and fall short of the glory of God” Romans 3:23

But wait, there’s a little more here to the story. After Jesus says, “Truly I tell you, today you will be with me in paradise” Luke 23:43 It was around noontime and complete darkness filled the sky for three hours. This was the darkest time history has ever seen. This was Jesus’ darkest hour. This was the time he agonized over the most. It was during this time that He was separated from God. This is when the sin of us all was being poured upon Him. All sin! Everyone’s sin. My sin. Your sin.

“Later, knowing that everything had now been finished, and so that Scripture would be fulfilled, Jesus said, “I am thirsty.” A jar of wine vinegar was there, so they soaked a sponge in it, put the sponge on a stalk of the hyssop plant, and lifted it to Jesus’ lips. When he had received the drink, Jesus said, “It is finished.” With that, he bowed his head and gave up his spirit.”

When Jesus proclaimed “TETELESTAI”. He meant, “It has been finished. It is now finished. it will be finished”. Past. Present.Future. And this is the very good news of Good Friday. But the question remains: What do these words mean to you? 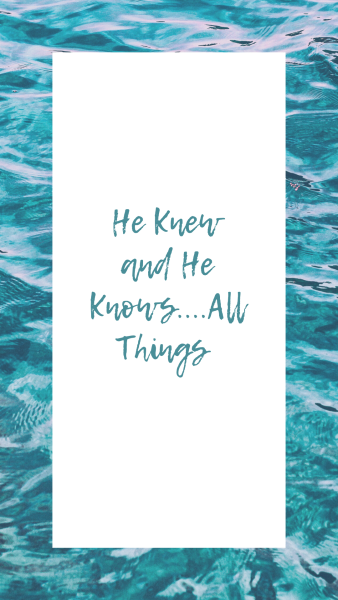 Today, as I was reading through the evening dinner of the Last Supper a few key points, jumped out at me again. And again I find myself more and more amazed with the way that God reveals Himself to me. I cannot tell you how many times I’ve read through the passages of scripture and I’ve never seen these things. Was I not looking for them? I don’t think that’s the case. I think God reveals things He wants us to discover when the time is right and I also think it has to do with the condition of my heart.

For reference, I read John 13 today and it the story most of us are very familiar with and the greatest act of love Jesus exemplified before His death. The washing of the disciple’s feet. But today as I was reading through this passage, the words, “Jesus knew” or “He knew” were repeated quite a few times. The first time is in John 13:1, “Jesus knew that his hour had come for him to depart out of this world to the Father…”. The second time in verse 3, “Jesus knew that the Father had put all things under his power and that he had come from God and was returning to God.” The next time in verse 11, “For he (Jesus) knew who was going to betray him.” And then there’s inference that Jesus knew in John 13:36 when He tells Peter that he will deny Him three times before the rooster crows.

When I think about the fact that Jesus knew all of these things and yet He didn’t use his power or position to make himself look great. He did not make Himself a hero. He didn’t strike Judas dead. He didn’t call Peter a fool. What He did was the most profound act of kindness and servanthood imaginable. He washed their dirty feet. He washed the feet of the one who would betray him. The one who called him a friend to his face and would backstab him later. He washed the feet of the one who would deny him, not once, twice but three times. He washed the feet of the one, Thomas, who would doubt Him. He washed all of their feet and He knew all things about them. And then He gives them this command, “A new command I give you: Love one another. As I have loved you, so you must love one another. By this everyone will know that you are my disciples if you love one another.” John 13:34-35 NIV. You see, three years earlier Jesus had invited these men to follow Him and now He’s leaving behind the most remarkable example of humility and compassion for them to follow and for us as well. Serve others. Treat them with kindness and compassion, even those who’ve wronged you.

Beyond this, Jesus is also teaching us that we cannot clean ourselves up, only He can do that. When Peter tells Jesus not to wash his feet, Jesus responds, “Unless I wash you, you have no part with me.” John 13:8 You see, Peter didn’t want Jesus to touch his dirt and grime. It was so gross to him that he could not even imagine Jesus, the Teacher, the Messiah, touching his filth; but you see that’s why Jesus came and that’s why He wants us to come to Him in our humble, shameful, and dirty messes so that He can wash us clean. Don’t miss the greatest invitation that Jesus is giving you because you think you’re too filthy and dirty. (There was a time when I felt the same way) Follow Him. Give your heart to Him. He already knows all about you and He loves you anyway.