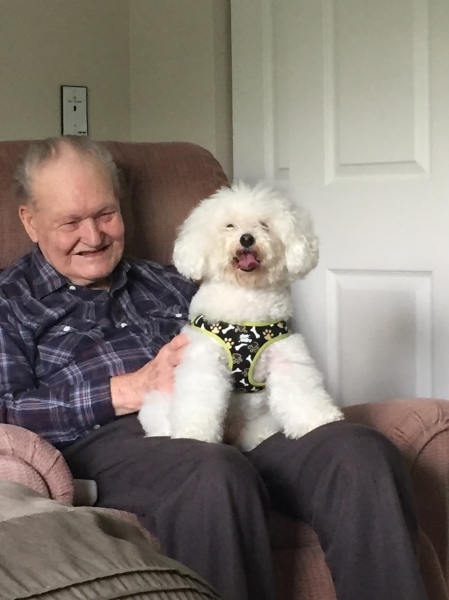 In my post, “Miracles Happen”, I mentioned the fact that God has the final say. It’s true of life and death.  Just three days after writing that post our family would experience this reality firsthand.

On Sunday my Mom convinced Popaw to go with her and Ned to Hickory on Monday to visit his two sisters.  She reasoned with him by telling him that out of the three siblings he was much healthier and steady on his feet than his two younger sisters. He gave in and agreed to go.

Monday morning they picked him up from The Bridge.  He was complaining with heartburn, which is not unusual for him. It’s actually, as far back as I can remember, always a normal occurrence.  As the day drug on, so did his heartburn. Mom gave him some Tums. Then after eating a light lunch Judy, his niece gave him Pepcid because he said it had worsened.

By the time Mom returned from taking Aunt Bobbie back to her room. Popaw was pale, clammy and could not walk. Fairly certain he was having a heart attack, she got the address of the assisted living facility and called 911.

Promptly, EMS arrived and began working with him. Before putting him in the ambulance his pulse reading was 30.

Once they got him the hospital they had to    use the AED to shock his heart. According to the nurse who talked to Mom after, Popaw was not happy they used them.

Later when Mom talked with the doctor. He told her that a Popaw had suffered a “big” heart attack. They were able to use angioplasty; but stints would not stay in because his arteries are so hard.

He was kept in ICU overnight and moved to a regular room the next day. Released on Thursday and brought back here to Life Care.

The doctor was petty clear that Popaw’s fix is only temporary.  At some point his arteries will close back up and blood will not pass through, which will inevitably lead to death. The next time they won’t use paddles. He has a DNR. He actually had his DNR updated a week prior to his heart attack, only the hospital staff in Hickory had no idea.

You see, the thing about my Popaw is that he’s ready to go. He’s been ready to go for a very long time.

In fact, just three days prior to his heart attack, Sammy and I were visiting. (Picture above)  He and I were talking about the fact that MaMaw had been gone for 7 years.  He said, “Honey, I miss her more and more every day.  In fact my heart longs more and more to see her and  meet Jesus”.

Now, I’m not living under any false pretense that when my Popaw dies it’s going to be easy. It won’t. He’s been my constant, as constant as the stars in the sky or the sun that brightens the day or the moon that lights up the night sky.  My whole entire life he has been a source of great kindness, gentleness, humbleness, patience, meekness…. and a constant source of joy. There is no one on earth that will ever fill the shoes he leaves behind. Not one. But I am thankful. Thankful for the time I’ve had and oh, so thankful for the time still left here.

We are not promised tomorrow. God saw fit to give us a little more time. Maybe it’s to prepare our hearts. Maybe Popaw still has a life to touch. Maybe Jesus just hasn’t finished his place because He’s pretty clear that when our place is prepared, He will come for us. Whatever the reason, God will have the final say.

You saw me before I was born. Every day of my life was recorded in your book. Every moment was laid out before a single day had passed.  Psalm 139;16NLT

Last year when we moved Popaw from his house to The Bridge at Lake Point Landing.  It was a tough transition for him.

He was being taken from his home of 44 years and his independence was being seized right out from underneath him.

He had fought the idea, for a while, but it was finally apparent he could no longer safely remain by himself.  He knew it too and didn’t put up much of an argument about going.

It was hard. Hard for him. Hard for mom. Hard for us all. It’s only the second or third time I’ve ever seen Popaw cry. It wasn’t the ugly loud cry. It was silent flow of tears rolling softly down his cheeks. It was heart wrenching!

After getting him settled, everyone left, well, everyone except me. For some strange reason, I decided to linger with him a little longer

He was flipping through channels as we were chatting.  He ran across some preacher who was talking about the Israelites.  He talked about how they had been taken from their homes, wandered around in the wilderness for 40 years and then God led them to the land of milk and honey

Popaw looked at me and said, “Well that’s exactly how I feel, everything’s been taken from me. My house.  My car.  Everything I’ve known for many years. I feel like I’m in the desert now. Then they bring me ice cream and it’s like God gave me my milk and honey.  Milk because ice cream is made with milk and honey because it’s sweet.”

I sat there thinking, “Wow!  What an incredible perspective.”

The truth is, that’s the way he always sees things.  He always finds the good in any situation.  His kind heart and gentle spirit give him the ability to look beyond even the most difficult of circumstances and find the good.

Sometimes my biggest problem is that I fail to look at things from a different perspective.  I see the negative and I stay there. I feel the weight of overwhelming circumstances. I feel the blows of life and fail to look for the good. The sad truth is when I fail to see the good, I most often times miss the blessing.

The truth that the Israelites learned while in the wilderness was that God’s provision was always there   Not only did he guide them a cloud  by day and a pillar of fire by    night.  He gave them food daily.  He took care of them.

Popaw has seen, felt and experienced the goodness and richness of God  He has experienced God’s ultimate protection and provision for a long time.  However, I believe the moment he was moved from his home, he felt empty.  He felt alone  He felt like a fish out of water.  But he determined not to look at all he’d lost.  He looked at what was ahead.  He chose to see the goodness of the Lord once again

The picture above is the reason I know that prayer works.  It is effective.  It is powerful.  Miracles happen when people pray.

Look closely at the two men in the above picture.  One is Ned, my dad, who has lung cancer.  The other is my Uncle Howard who has colon cancer.  Both of these men are still, by God’s grace and through the effective prayers of His people, alive today.

If you will remember my earlier post, “The best $6.00 money could buy” was about my Uncle Howard.  Even when I wrote that post, it was uncertain what his future held.  I knew he had a desire to see his youngest grandson graduate from high school because during my visit with him, he told me so.  He just didn’t think he would live to see it happen.  Quite frankly, I don’t think anyone did.

Guess what?  He did get to see his grandson graduate.  Today.  He was there.  God gave him the desire of his heart and I’m so very thankful.  This is nothing short of a miracle.

And then there’s Ned.  His original diagnosis with lung cancer was 9-15 months with chemo treatments.  Guess what?  It’s been 15 months since chemo began.  Wait.  There’s more than that to the story.  Chemo began in March 2016.  We asked people to pray specifically that the chemo would deplete the fluid in his right lung.  It did.  In fact, after only 6 months of treatment, his lung was completely clear.  He was given a break from chemo and for the past 7 months. Every 8 weeks has been having CT scans to monitor his lungs and the possible return of cancer.

Sadly, the most recent CT scan showed cancer in the lymph node in the mediastinum.  This week he will begin a second line treatment that will consist of Keytruda, immunotherapy instead of chemotherapy.  The hope and prayer are the immunotherapy will thwart the growth and/or spread of the cancer as effectively as the chemotherapy with fewer side effects.

Every day is a miracle.  It is a gift.  Live in the miracle God gives you today and don’t get so caught up with tomorrow.  It may never come.