On February 6, 1966, Popaw had the honor of walking both of his daughters down the aisle. Yes, a double wedding ceremony with, you guessed it, matching dresses. What a joyous occasion of all and a certainly a day not to be forgotten.

Just look at those sweet smiles. They all look so relaxed. Trust me, Aunt Trisha and Mom were very relaxed, or soon would be. Popaw is just naturally relaxed.

My precious Mamaw had some serious bouts mental illness during her lifetime. It wasn’t something that was brought up on a regular basis. However, there was a period in her life when she had to be given shock treatments and spent some time away in a mental hospital. Fortunately, after that time her issues were controlled through medication.

At this point in her life, she only needed Valium to calm her nerves. She was a bundle of nerves. Apparently, on this day she was more than a bundle of nerves. She was so nervous, she decided that Mom and Aunt Trisha would be nervous too. So, she gives them both a Valium and they take it. Little did they know how one little pill would affect them. 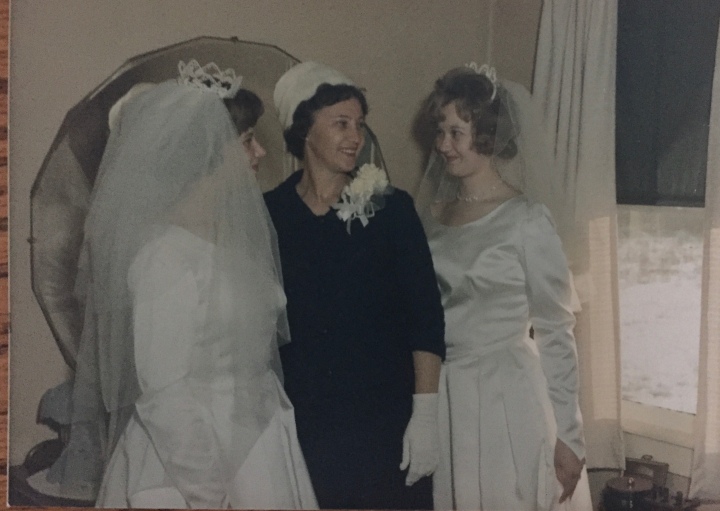 Mom doesn’t recall exactly when the pill kick in. She just remembers that by the time they got in the car to head to Florida, she was sound asleep by the time they reached Ceasars Head, which is about 15-20 from where the reception was held. And she slept and slept and slept, only waking for a potty break and food. She awoke when she and Daddy reached their destination.

I recently asked her, ”One thing I am curious about, did you have sex on your wedding night?”

She began laughing and said, ”Yes, but I couldn’t do much. I was too tired. Your Dad told me that I would never take one of those pills again.”

The moral to the story: just because you’re a nervous wreck doesn’t mean others feel the same way and never give your child a Valium on their wedding day.