As I was reading in Jeremiah 16 this morning, I couldn’t help but think of you. God asked Jeremiah to do some hard things. He asked him not to get married, which meant no hope of children or grandchildren, and he also told him not to even attend wedding ceremonies. It must’ve been hard for him to follow God’s instructions, don’t you think? But he did exactly what God asked him to do. Just like you.

No, God didn’t ask you not to marry. In fact, he sent you a beautiful Godly woman. He gave you children to carry on your namesake. God just asked you to suffer greatly for him. He asked you to walk in a six-year battle with cancer. He asked you to share your faith with others while you were in the midst of great suffering. You did exactly what he asked you to do.

Do you realize the impact of your faith? Do you know that even after 42 years your life and how you lived it continues to have a profound effect on me? Do you know why? Because your response to God was just like Simon Peter when Jesus told them to put out in deep water and cast their nets again, “because you say so, I will”. Luke 5:5. Like Simon Peter, there may have been times of doubt. However, your unwavering faith brought and carried you through any season of doubt. You remained strong, steady and faithful until the end.

A couple week ago Mom discovered this photo and sent it to me. A little girl with her Daddy on bended knee. As I’ve thought about this photo, it occurred to me that on your 29th birthday, you and Mom were anticipating my arrival. By the following year, you received the initial diagnosis of cancer and then just six years later, cancer took your life. But, you believed in the power of prayer, you believed that God would take care of your family once you were gone. He did and gave us Ned. (I can only imagine the conversations the two of you have had this past year) You believed this little girl would one day believe and have a faith of her own. She did. It took until she was 22. Your life, albeit short, continues to make a difference in me. Thank you, Daddy, for teaching me how to pray. To believe in the power of prayer and always putting action behind your faith. 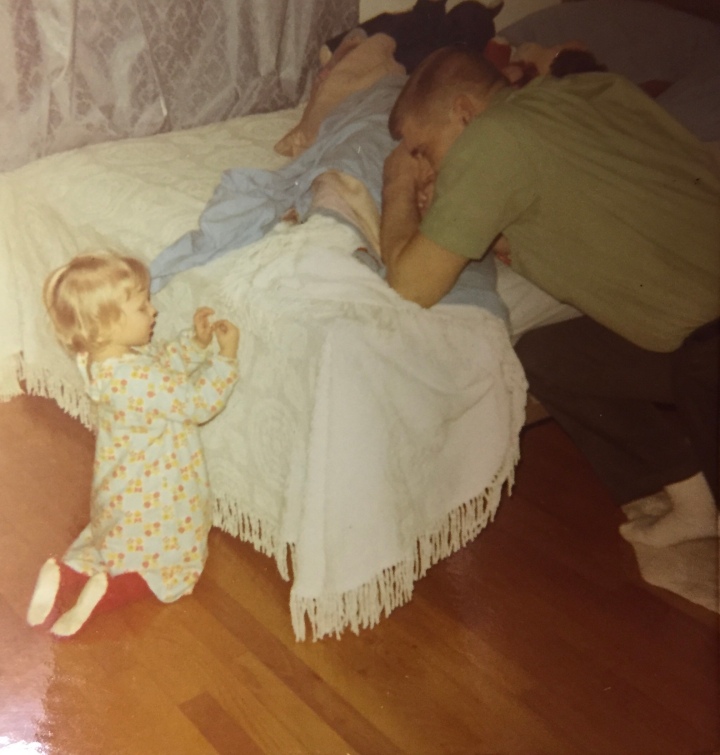