First of all, Ned insisted that we have a live Christmas tree.  I think that was my first every experience with a live tree.  If we had them before, I have no recollection.  I doubt we did.

Anyway, I don’t remember if we chose the tree or if Ned brought it home.  I just remember he insisted on putting the lights on.  He had his own way of doing it.  After the lights were hung, we all particpated by hanging the ornaments.  During that period of time, garland and tinsel were also popular adornments for trees.  Ned wrapped the garland and Mom and I began working on the tinsel.

Keep in mind that Mom and I had our way of doing things.  I had been helping her since as long as I can remember.  Our method of hanging tinsel was to throw it up and let it fall freely onto the tree.  If the tinsel clustered, you just moved it around to other branches.  This was our method.  We began.

Suddenly, Ned burst onto the scene and said, “On no!  Y’uns (more slang than y’all) are doing it all wrong.”  He stopped us dead in our tracks! Then proceeded to remove most of the tinsel on the tree and rehang it, Any guessing how he hung the tinsel? If you guessed one at a time,you guessed correctly. Not only was it one strand at time, each strand was placed strategically and neatly. It was so stressful that Mom and I decided it best to let him do it all by himself. Chances are he would’ve rehung it anyway.

Yesterday, because I’m curious and inquiring minds have to know things, I texted his sister, Maxine. I knew she would know, I asked her if Ned got that from his mother, Louise. She was very meticulous and did things with great precision. Therefore, I just naturally assumed he learned it from her. Look below at her response. 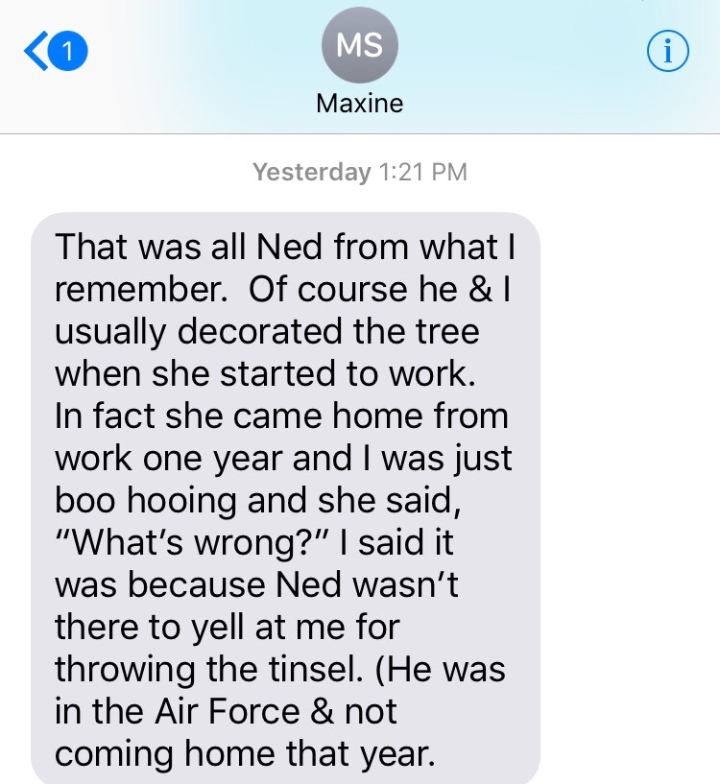 Her response made my day and we all had a good laugh. Ned just did things Ned’s way.

The observation I take away from this memory is that Ned always finished anything he started. Just like hanging the tinsel our way would’ve gotten it finished much sooner but he wanted it done his way. He strung every strand the way he wanted it on the Christmas tree and he didn’t leave it halfway. He completed it.

A few days before he died, on Friday to be exact, I wrote the following verse on his whiteboard and spoke it over him, “Being confident of thus, He,who began a good work in you, will be faithful to complete it” Phil 1:6. God never starts anything He does not bring to final competition,

Mom and I wanted to just toss the tinsel and allow it to free fall because it took less time and still looked good, Ned’s meticulous way of hanging strand by strand, took much more effort and the end product much prettier than our way. Its same way God works and lives in us. Strand by strand until final completion and at the end the creation isn’t just pretty it’s absolutely beautiful!