Our next stop, Watson Pavilion, which houses more ceramics, a Japanese Tea Room and portraits of the Washington-Custis-Lee Collection. They were working on a new exhibit so we found ourselves in the portrait gallery. I was reading about the people in the portraits while Terry was looking.

One of the stories the guide had shared previously was about Martha Dandridge, who would later become Martha Custis, and then Martha Washington. Apparently, Daniel Parke Custis struggled to find a suitable wife or at least one his father would approve for him to marry. That is until he fell in love with Martha Dandridge. Considering he was one of the wealthiest men in Colonial Virginia, Martha was lucky to receive the approval of Daniels father, John.

Daniel and Martha had four children in their seven years of marriage but only two of the four survived into adulthood. In 1757, Daniel died. He died without a will, Martha and the two surviving children were granted one third each. Daniel’s death made Martha one of the wealthiest women in Virginia.

It is believed that George knew both Daniel and Martha prior to his death. George and Martha were married a little over a year after Daniel’s death. Although they never had children of their own, George and Martha raised her two children and would later raise their grandchildren as well.

Anyway, as we were gawking at the paintings, I said to Terry, ”Look, Daniel was quite a plumpy little man. Maybe Martha just married him for his money. He’s not a looker.

Terry’s response to me, ”Well, he must’ve married Martha because of her big boobs!. Just look how big they look in the portrait. I mean, you can’t help but notice. Maybe that’s what ole George was thinking too.”

Honestly, it’s a wonder we didn’t get kicked out because I swear, I howled. Up until that point it was so quiet a mouse could be running the floors, you know, library quiet, and it was a dang good thing they weren’t hosting a Japenese Tea party. Oh, my, we had to get out. We were disturbing the peace and I really don’t think it was appreciated 😂

Y’all this is the crazy live with day after day and I tell you, it’s like a very fine wine and gets better and better with time.

We began our day early. Breakfast followed by plans to go see The Natural Bridge See here. We set out on our adventure. Got directions from Siri and followed her route. We were less than 20 minutes away, or so we were told and according to the directive signs along the highway. Siri told us to take a right and Terry missed it. So we turned around at the Pink Cadillac Diner. Followed Siri’s directions and traveled rural streets until we supposedly reached our destination. It was not our destination and much to our dismay we needed to backtrack to the Pink Cadillac Diner to find our way.

Our out of the way mileage was approximately 15 miles, but on rural roads in Virginia, you don’t travel fast. We even came upon a cow out of his fence, walking beside our car.. We finally, after 30 minutes, possibly a little more, of going in a circle, found our destination. It was cloudy and rainy, not pouring rain, but more than a light mist. Inside we talked with the lady at the ticket counter. She told us the cost was $8.00 pp and the walk, if we completed it all was about 2 miles total. Terry looked at me and said, ” You don’t want to do this, do you? It’s raining,”

We had come this far and made a circle to get here. “Yes, I want to go. Besides, I have an umbrella. I’m not bothered by the rain”.

The lady at the ticket counter smiled at me as if to say, “I can see you’re going to have your way today.”

“Besides, you have a raincoat in the car”. I argued.

Reluctantly, he handed the $16 over and went to the car to get his raincoat.

To our surprise and amazement, the more we walked the less it rained. As we neared the cavern, on the other side of the bridge, it began to clear. In fact, by the time we reached the crossover to the Lost River, the sun began to poke its way through the clouds. It turned out to be a perfect day for our visit. 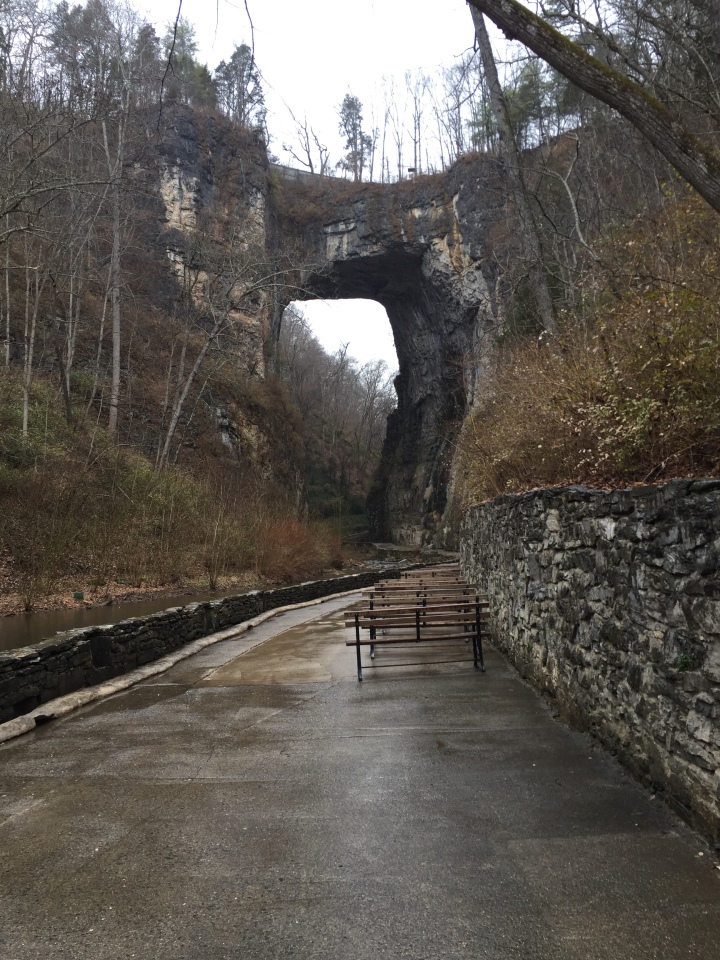 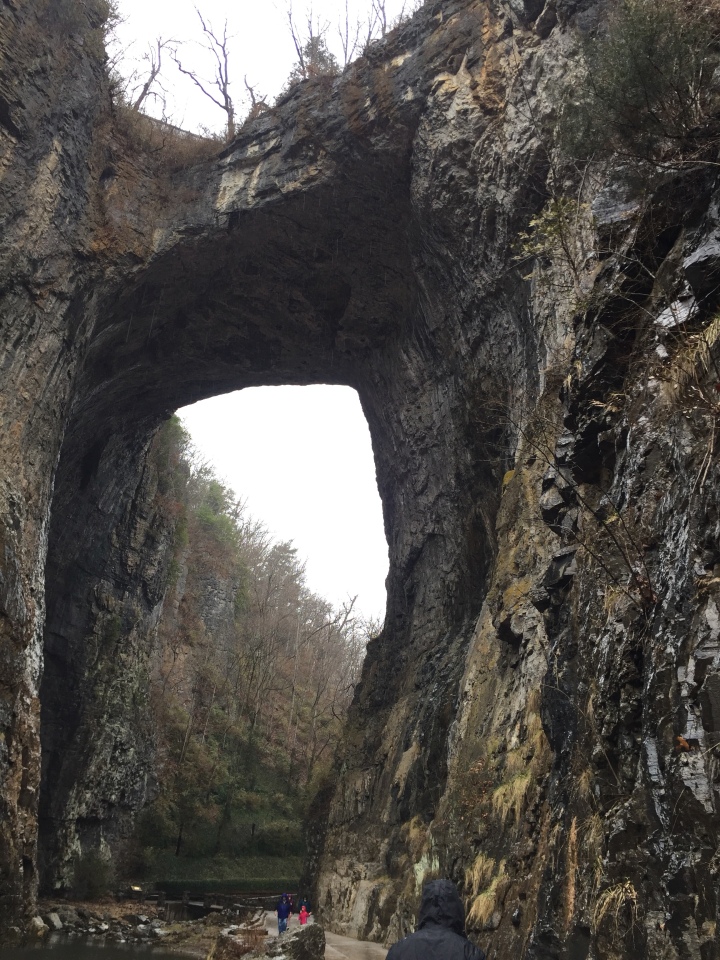 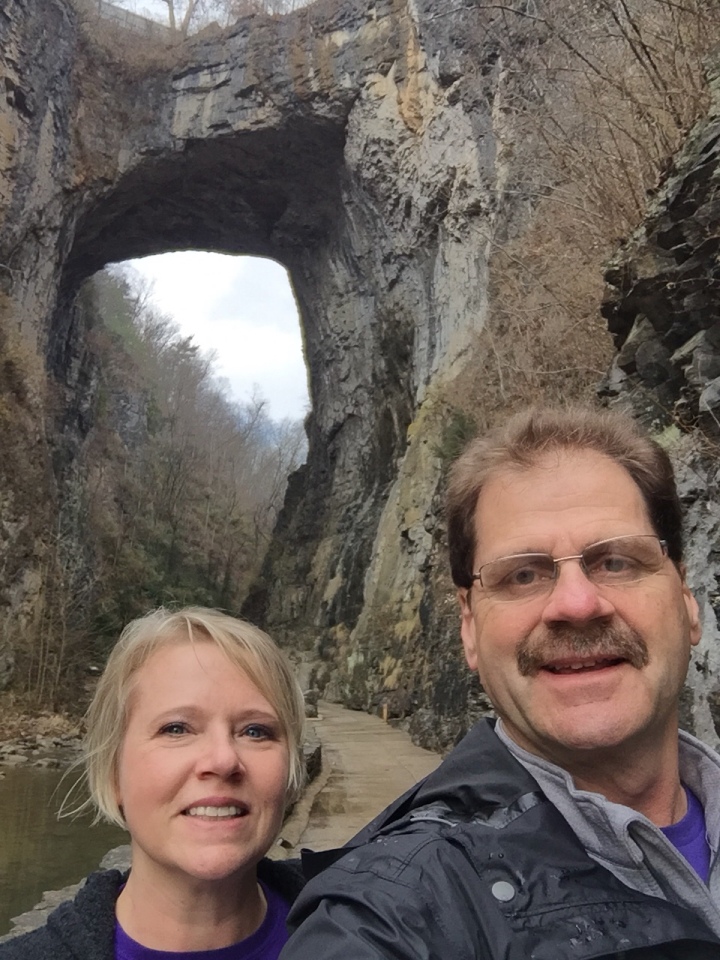 Sometimes in life we have detours and feel like we run in circles. When we finally get to our destination, we may be weary or conditions aren’t as we had hoped. However, we can’t allow the detours or conditions to keep us from moving forward because we may miss the blessing.