A few weeks ago during a lunch conversation with my friend she looked at me and started, ”I don’t know how you do it. How do you still have hair on your head?”

She was referencing a recent stunt Amy, my daring, brave and impulsive, adult child attempted. She failed miserably because the concrete doesn’t move.

As I sat explaining the events as they unfolded, and showed her thr video of a life-sized human tucked in a watermelon position, almost fetal position, traveling headfirst into a shallow 2 1/2’ of water and my friend realized end magnitude of possible injury Amy could have suffered was thr point at which she uttered the aforementioned inquisition.

It was not the first or second time I’ve heard that statement. It’s one that has begged he to search deep and discover why I do after four rather rambunctious children have a single hair left on my head. Lord knows there were times I could’ve have pulled mine and theirs out.

As I’ve shared with you, my Mamaw had some mental illness, as a result, she was a worrywart. If there wasn’t anything for her to worry about she had a knack for conjuring up something in the overactive mind of hers. I definitely learned from her what not to do. I simply can’t live in fear of what might or might not happen. It’s far too taxing on the mind and time-consuming.

My Grandma Reese, on the other hand, knew what it takes to raise children without dread, fear or worry. She was left with four boys to raise when Grandpa went to war. She was a staunch disciplinarian. You didn’t sass, talkback, to her. She demanded immediate obedience. She just didn’t take crap off her kids, or anyone else for that matter, even her grandchildren knew to obey.

Furthermore, she had sass. Which I suppose is the reason she didn’t allow it in her children.

While, I picked up my sensitivity, love of laughter, love for books and storytelling from Mamaw. My spunky sass, talkative nature and worry-free attitude definitely came from Grandma. In combination, they seem to work for me.

More importantly, than my generic make-up is the fact that I have a great big God who says this: I don’t know a lot about fishing but I’ve been a time or two in my day. When you cast a line, you throw it out. Friends this is precisely what God is telling you to do. Throw your cares on me. Leave them there. Don’t reel them back in. 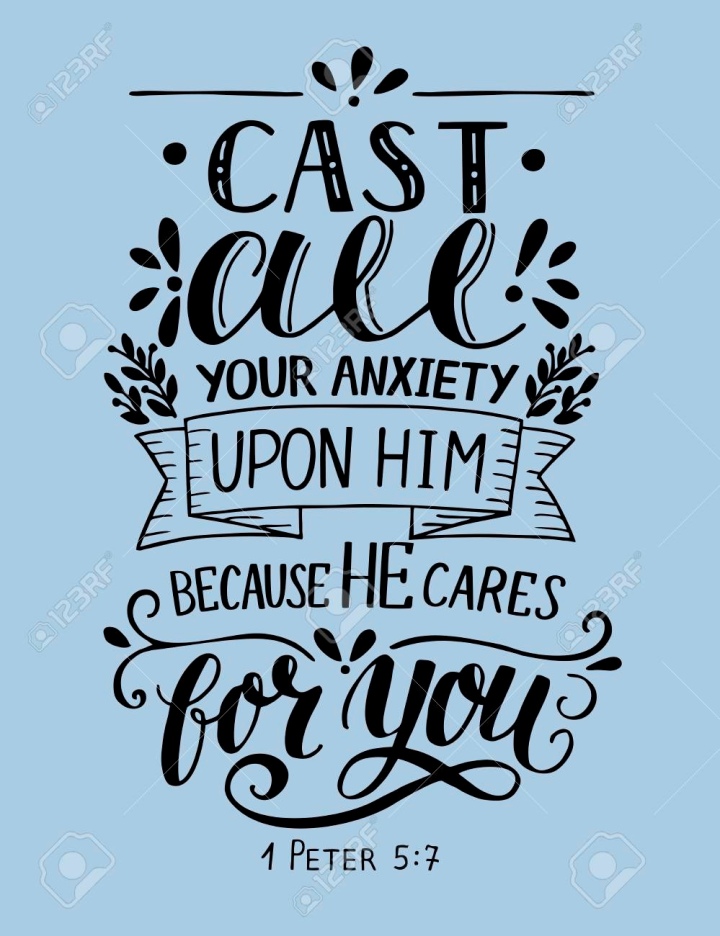 So many things have happened in my lifetime, but one of these took place nine years ago when I said goodbye to my two older boys and sent them off to Basic Training for the US Navy. In less than three months time we went from a family of six to a family of four. The most difficult part of having service members is the lack of communication, especially during deployment. There were a few times both were deployed during the same timeframe. One of the East Coast and in the Atlantic Ocean and the Mediterranean Sea. The other on the West Coastand in the Pacific Ocean and North China Sea. (It just happened to be during the time of unrest with North Korea)

Needless to say, if I had spent my days worrying about all the ”what ifs”, I would never have accomplished anything. Instead, I chose to, every day, throw my worries and concerns on God. In fact, I strive to begin each day by giving God my concerns especially where my children are concerned.

As a Momma, I want them covered and bathed in prayer. The good news is that prayer knows no bounds. It can break through barriers and can reach the depths of the ocean. And on Saturday, July 20th, He kept the concrete from breaking Amy’s neck. She did have a mild concussion and a few scrapes and raccoon eyes for about two weeks.

In conclusion, the only reason I have a single hair left is that I choose to take my cares and concerns to God. Yes, I do sometimes reel them back in and I have to cast them back out; however, I am fully confident that the One who gave these children to me is far more competent to watch over them than I am and why am I going to worry and stress when there is absolutely nothing I can do anyway.