When my oldest son, Ryan was about 13 months old and showing no signs of interest in walking, I along with our beloved pediatrician became concerned. Oh, there was no concern for fine motor skills or cognitive development. He was already talking a blue streak. He manipulated objects meticulously with his hands and his eyes always seemed to be studying how things worked. He crawled and could get anywhere he wanted to go. He would pull up and stand but wasn’t really interested in holding your hands to walk and absolutely no interest in walking on his own.

One day during a routine office visit the pediatrician suggested purchasing a little red wagon made by Fisher-Price. (Like the one below( She said it would encourage walking. Also, it would serve as a dual purpose ride-on toy as well. 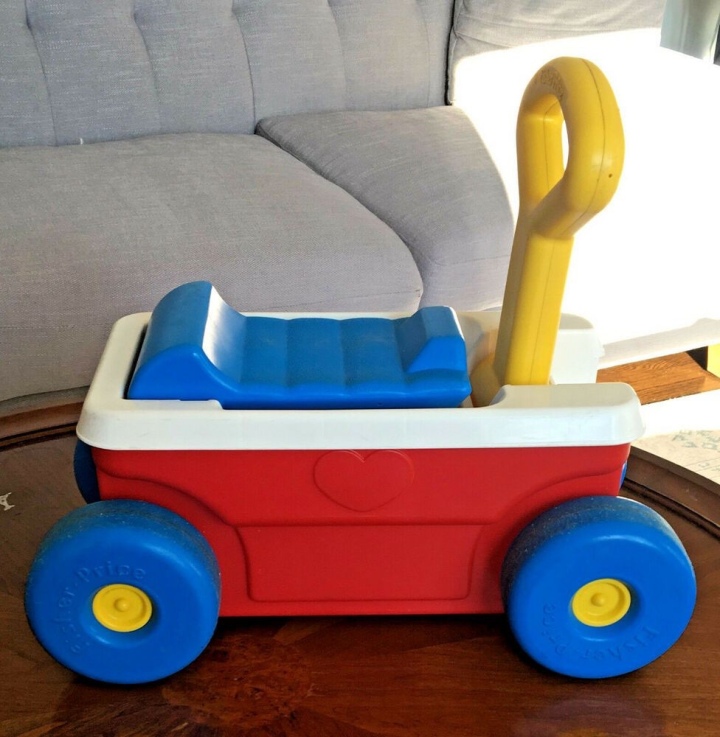 We made our purchase immediately upon leaving her office. We excitedly gave Ryan his new toy. We attempted for days to encourage him to stand and push the wagon, he rejected our efforts. He wasn’t keen on using it as a ride-on toy either. Oh no, not my Ryan. He was far more interested in the seat. He quickly noticed the seat lifted up. He spent hours lifting and lowering the seat. After a few weeks, he discovered there enough space to hide things under the seat. Often when we were missing items, we would ask Ryan and he would crawl to his wagon, lift the seat and proclaim, “Here!”

Finally, after about a month, he would use the handle and walk a little but if he had somewhere he wanted to go quickly, his knees hit the floor and he crawled. I guess you could say we were making some progress. Just not fast progress. It would be another month before he would officially take his first real steps and walk.

As I think about this story, it reminds me that some things happen immediately and some things take time. Sometimes, we need help and encouragement to take the next step. Sometimes we are like Ryan, satisfied to be crawling when we should be walking. It’s a place called complacency.

Have you been there? Are you there now? I have been and I can tell you that it’s not a good place to be. You don’t flourish when you’re complacent. You know why? Because you’re so satisfied with yourself or the way things are you don’t see a need to change. It’s sometimes referred to as the silent killer.

The Cambridge Academic Content Dictionary defines “complacency” as “a feeling of calm satisfaction with your own abilities or situation that prevents you from trying harder.”

So, how do we combat complacency?

Get a little red wagon and learn to walk. Actually, yes.

Avoid the trap of laziness Ryan became lazy about walking because crawling was easy for him. He could get to everything he needed or wanted. He didn’t realize until he started walking/running that he could move a lot faster. Most often its self-absorption that will keep us in the trap of laziness.

The best way to avoid becoming complacent is to do the following:

Put one foot in front of the other