I’ve been avoiding this post like the plaque. A few weeks ago when God began churning my heart, I told Him, “Not now”. Yes, like I’ve said before delayed obedience is disobedience and I disobeyed.

I think as I write you will see why I avoided writing. However, the urge is so great within me, I can no longer resist.

As you know my biological father died when I was 7. He died from Melanoma and you can read some of his story in my blog post, My sweetest sorrow.

Now, we are at another crossroads with cancer. My stepfather, Ned. He was diagnosed 18 months ago with Stage 4 Atypical Non-small cell adenocarcinoma lung cancer. It sucks. I’m just not going to sugar coat anything about it.

A few months back, well technically a few years ago God began to stir this thought and idea about these two men I have had to privilege of calling Dad.

Mack, my dad, had a strong enduring faith in God. He hoped beyond all hope that one day a cure for Melanoma would be discovered. Knowing full well it would not be in his lifetime, he allowed the doctors at Baptist Hospital (Wake Forest) to try new treatments on him. He was their guinea pig. His philosophy and mindset was to aid in the research and help others in the future.

Another thing to understand about my dad is that he never shied away from sharing his faith. He firmly grasped and held tight to his belief in Jesus. He had strong convictions about sharing his faith and the above picture is a treasure straight out of his Bible. His desire was to see that no one would perish without knowing Jesus. His chief goal in life.

I believe that through his death his chief goal was reached and realized. When Jesus tells us in John 15:13 “Greater love hath no man than this, that a man lay down his life for his friends.”

Bear with me while I explain.

As their relationship began to grow so did his love for Jesus. Eventually leading up to his rededication. In perfect Ned style, it was not a haphazard decision, it was done with intent and passion. A decision he will tell you was the best choice he ever made aside from marrying my Mom.

The reality here is that without my dad having died, Ned may have never been able to experience the blessed life that only Jesus can give. If you ask Mack if it was worth dying for he would say, “I wouldn’t have it any other way.”

When I wrote these words, Ned was still with us and it would only be another six weeks until God would call him Home. Today marks 43 years since my Daddy has been in Heaven. In the past, this particular day has been such a painful hard day, but not today. What’s different?

My attitude. What I’ve realized with both Daddy and Ned was they were willing to embrace the process, to endure the pain to receive the victory. They both knew earth was their temporary dwelling and they both knew where they were going. Isn’t that exactly what Jesus did for us on the cross?

He soul agonized over having to endure the cross. He begged God for another way. When He knew there was no other way, He simply said, ”Not my will but yours” At this point, He embraced the process. He endured the cross. And when he spoke, ”It is finished” is His declaration of victory.

You will never get to the victory of the cross without enduring the pain and you’ll never be able to endure the pain without embracing the process. 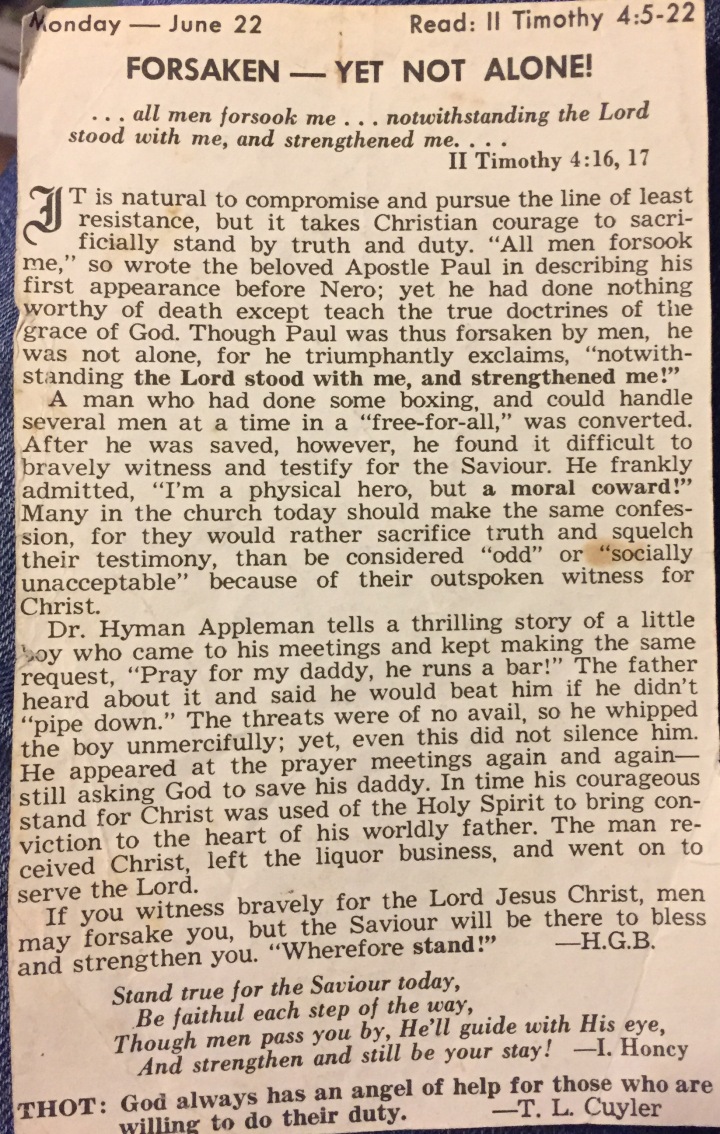 I found this devotion in my Dad’s Bible. I wonder if it was something he had before his diagnosis or if he found it later. I don’t know the answer but what I know is that He bravely witnessed for the Lord and many lives were changed…….mine included.